Abstract
Sulfur concentrations at sulfide saturation (SCSS) were determined for a range of low- to high-Ti lunar melt compositions (synthetic equivalents of Apollo 14 black and yellow glass, Apollo 15 green glass, Apollo 17 orange glass and a late-stage lunar magma ocean melt, containing between 0.2 and 25 wt.% TiO2) as a function of pressure (1–2.5 GPa) and temperature (1683–1883 K). For the same experiments, sulfide-silicate partition coefficients were derived for elements V, Cr, Mn, Co, Cu, Zn, Ga, Ge, As, Se, Mo, Sn, Sb, Te, W and Pb. The SCSS is a strong function of silicate melt composition, most notably FeO content. An increase in temperature increases the SCSS and an increase in pressure decreases the SCSS, both in agreement with previous work on terrestrial, lunar and martian compositions. Previously reported SCSS values for high-FeO melts were combined with the experimental data reported here to obtain a new predictive equation to calculate the SCSS for high-FeO lunar melt compositions. Calculated SCSS values, combined with previously estimated S contents of lunar low-Ti basalts and primitive pyroclastic glasses, suggest their source regions were not sulfide saturated. Even when correcting for the currently inferred maximum extent of S degassing during or after eruption, sample S abundances are still > 700 ppm lower than the calculated SCSS values for these compositions. To achieve sulfide saturation in the source regions of low-Ti basalts and lunar pyroclastic glasses, the extent of degassing of S in lunar magma would have to be orders of magnitude higher than currently thought, inconsistent with S isotopic and core-to-rim S diffusion profile data. The only lunar samples that could have experienced sulfide saturation are some of the more evolved A17 high-Ti basalts, if sulfides are Ni- and/or Cu rich. Sulfide saturation in the source regions of lunar melts is also inconsistent with the sulfide-silicate partitioning systematics of Ni, Co and Cu. Segregation of significant quantities of (non)-stoichiometric sulfides during fractional crystallization would result in far larger depletions of Ni, Co and Cu than observed, whereas trends in their abundances are more likely explained by olivine fractionation. The sulfide exhaustion of the lunar magma source regions agrees with previously proposed low S abundances in the lunar core and mantle, and by extension with relatively minor degassing of S during the Moon-forming event. Our results support the hypothesis that refractory chalcophile and highly siderophile element systematics of low-Ti basalts and pyroclastic glasses reflect the geochemical characteristics of their source regions, instead of indicating the presence of residual sulfides in the lunar interior.​

The lunar core can be a major reservoir for volatile elements S, Se, Te and Sb

Key points
- Metal-silicate partition coefficients of volatile elements S, Se, Te and Sb were found to be sufficiently high to explain their depletions in the lunar mantle relative to bulk silicate Earth
- Se/Te ratio of lunar mantle represents core/mantle fractionation event
- Lunar core can be a significant reservoir for many volatile siderophile elements
​
Abstract
The Moon bears a striking compositional and isotopic resemblance to the bulk silicate Earth (BSE) for many elements, but is considered highly depleted in many volatile elements compared to BSE due to high-temperature volatile loss from Moon-forming materials in the Moon-forming giant impact and/or due to evaporative loss during subsequent magmatism on the Moon. Here, we use high-pressure metal-silicate partitioning experiments to show that the observed low concentrations of volatile elements sulfur (S), selenium (Se), tellurium (Te), and antimony (Sb) in the silicate Moon can instead reflect core-mantle equilibration in a largely to fully molten Moon. When incorporating the core as a reservoir for these elements, their bulk Moon concentrations are similar to those in the present-day bulk silicate Earth. This suggests that Moon formation was not accompanied by major loss of S, Se, Te, Sb from Moon-forming materials, consistent with recent indications from lunar carbon and S isotopic compositions of primitive lunar materials. This is in marked contrast with the losses of other volatile elements (e.g., K, Zn) during the Moon-forming event. This discrepancy may be related to distinctly different cosmochemical behavior of S, Se, Te and Sb within the proto-lunar disk, which is as of yet virtually unconstrained. 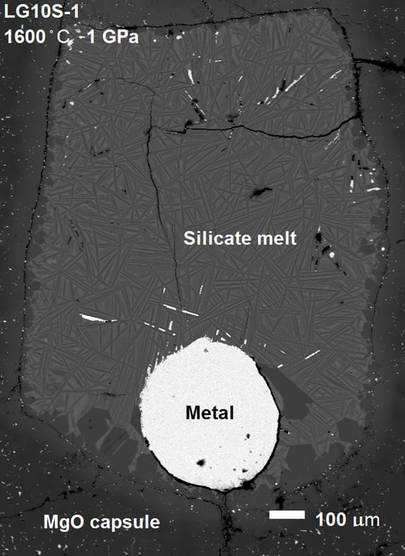 Carbon as the dominant light element in the lunar core

Key points
- Metal-silicate partitioning models for S and C, in conjunction with previously reported carbon and sulfur abundances in primitive lunar samples, suggest carbon is the likely dominant light element in the lunar core
- Carbon and sulfur abundances in the bulk Moon are likely similar to those inferred for the bulk silicate Earth  (i.e. limited loss of C and S during the Moon-forming event)

Abstract
Geophysical and geochemical observations point to the presence of a light element in the lunar core, but the exact abundance and type of light element are poorly constrained. Accurate constraints on lunar core composition are vital for models of lunar core dynamo onset and demise, core formation conditions (e.g., depth of the lunar magma ocean or LMO) and therefore formation conditions, as well as the volatile inventory of the Moon. A wide range of previous studies considered S as the dominant light element in the lunar core. Here, we present new constraints on the composition of the lunar core, using mass-balance calculations, combined with previously published models that predict the metal–silicate partitioning behavior of C, S, Ni, and recently proposed new bulk silicate Moon (BSM) abundances of S and C. We also use the bulk Moon abundance of C and S to assess the extent of their devolatilization. We observe that the Ni content of the lunar core becomes unrealistically high if shallow (<3 GPa) LMO scenarios are assumed, and therefore only deeper (>3 GPa) LMO scenarios are considered for S and C. The moderately siderophile metal–silicate partitioning behavior of S during lunar core formation, combined with the low BSM abundance of S, yields only <0.16 wt% S in the core, virtually independent of the pressure (P) and temperature (T) conditions during core formation. Instead, our analysis suggests that C is the dominant light element in the lunar core. The siderophile behavior of C during lunar core formation results in a core C content of ~0.6–4.8 wt%, with the exact amount depending on the core formation conditions. A C-rich lunar core could explain (1) the existence of a present-day molten outer core, (2) the estimated density of the lunar outer core, and (3) the existence of an early lunar core dynamo driven by compositional buoyancy due to core crystallization. Finally, our calculations suggest the C content of the bulk Moon is close to its estimated abundance in the bulk silicate Earth (BSE), suggesting more limited volatile loss during the Moon-forming event than previously thought. 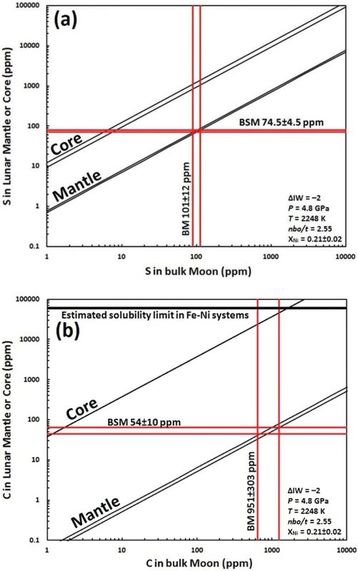 Key points
- Core–mantle differentiation occurred in a fully molten Moon
- The lunar core is not necessarily sulfur-rich.
- The Moon is not devolatilized in many volatile siderophile elements

Abstract
We re-examine the conditions at which core formation in the Moon may have occurred by linking the observed lunar mantle depletions of 15 siderophile elements, including volatile siderophile elements (VSE) to predictive equations derived from a database compilation of metal–silicate partition coefficients obtained at lunar-relevant pressure–temperature–oxygen fugacity ( ) conditions. Our results suggest that at mantle temperatures between the solidus and liquidus the depletions for all elements considered can be satisfied, but only if the Moon was essentially fully molten at the time of core formation while assuming a S-rich (>8 wt%) core comprising 2.5 wt% of the mass of the Moon. However, we observe that at temperatures exceeding the mantle liquidus, with increasing temperature the core S content required to satisfy the element depletions is reduced. As a S-poor core is likely from recent lunar mantle estimates of S abundance, this suggests much higher temperatures during lunar core formation than previously proposed. We conclude that the VSE depletions in the lunar mantle can be solely explained by core formation depletion, suggesting that no significant devolatilization has occurred in later periods of lunar evolution. This is in agreement with the discovery of significant amounts of other volatiles in the lunar interior, but hard to reconcile with current lunar formation models.